Hepatitis C is a serious disease that requires a thorough hepatologist’s examination before the treatment can be prescribed. Various antiviral drugs and their combinations can be used today to cure hepatitis C; the choice depends on various factors. When prescribed by a healthcare professional and used accordingly, these modern antivirals have excellent efficiency rates and cause very little side effects.

Hepatitis C, Only Five Years Ago…

It is hard to believe that only few years ago the treatment environment was so drastically different for hepatitis C patients. The only existing treatment was highly ineffective, with success rates around 50-60%. The treatment course lasted at least 6 months and sometimes up to a year.

Serious side effects such as anemia, headache, hair loss, weight loss, depression, anxiety and many others would result, and often cause doctors to stop treatment before positive results could be seen. Under these circumstances, it is no wonder that if the patient’s health condition and liver function stayed satisfactory, many doctors would not recommend the treatment at all. 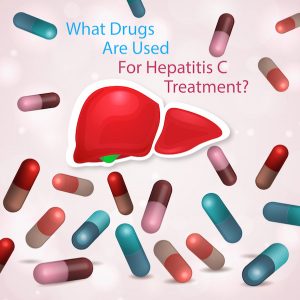 Today, many efficient hepatitis C drugs exist, and carry minimal side effects. With over a dozen of modern antivirals on the market and the new ones appearing every few months, even the best hepatologists have enough of a burden directing patients to the right medications.

Until recently, choosing the right hepatitis C drug required knowing the patient’s genotype. It’s only been few months since FDA approved the use of sofosbuvir-velpatasvir combo that can be quite efficiently used for any genotype of the virus. Many argue, however, that universal treatments do not necessarily mean the best for everyone. In the U.S. and other developed countries where testing genotype testing doesn’t pose a problem, it is by knowing a patient’s genotype that the doctor is able to choose the most appropriate treatment regime.

Liver fibrosis is an accumulation of tough, fibrous scar tissue in the liver. Generally speaking, producing scar tissue is a normal bodily response to injury. When a liver cell is attacked by the virus, heavy alcohol consumption, toxins or other factors, the liver naturally builds a scar tissue in its place. It is meant to be a “temporary fix”, and a healthy liver is capable of eventually breaking down this scar tissue. When excessive scar tissue builds up faster than what can be broken down and removed from the liver, this is when fibrosis occurs.

Over time, the fibrosis process can result in cirrhosis of the liver. This is when the liver cells are disorganized so badly and the functional units of liver are so disrupted that it causes the impairment of liver function. Cirrhosis is a very serious condition, causing complications including liver failure and liver cancer.

With effective antivirals finally available, it is imperative to treat hepatitis C before it causes cirrhosis or even severe fibrosis.

Liver stiffness is a good indication of liver condition. Using modern techniques such as FibroScan, the degree of fibrosis can be assessed painlessly and in less than ten minutes. Prior to FibroScan, only some 7 years ago, patients had to undergo a liver biopsy – a procedure where liver cells had to be taken for lab analysis through a puncture in the abdomen (ouch!). Thanks to modern technologies, we don’t have to go through that anymore!

Before HCV Treatment: What Your Doctor Needs to Know

Your doctor will need to know your viral load (the amount of the virus in your blood) and your liver condition, which can be told by looking at functional liver tests and liver stiffness.

Of course, knowing your general health condition prior to starting the treatment is also very important. Certain conditions such as renal impairment aren’t compatible with using certain drugs – or may require a dose adjustment. Some heart conditions, on the other hand, may imply that you’ll be possibly taking other drugs at the same time, in which case your medication list will need to be checked carefully for possible interactions.

If you had a liver transplant or already tried another hepatitis C treatment, make sure to let your doctor know. Viruses adapt to the drugs and form a certain resistance, so in some cases the treatment duration should be increased.

As new and new medications arrive, the latest FDA recommendations undergo drastic changes. Some medications that were considered the optimal treatment regimen only two years ago (sofosbuvir with ribavirin, for example, or simeprevir-based regimens for patients with decompensated cyrrhosis) are now labeled as “not recommended.” These changes are sometimes shocking, so it’s important to note that only a qualified, practicing hepatologist in possession of patient’s medical data can properly prescribe optimal treatment.