In high-tech consumer society it is increasingly common to think that cheap products are inevitably of poor quality. Realistically speaking, it is often true.

In many cases, producing a quality product requires significant investment, be it in quality materials, man power, or implementing complex systems to maintain production and quality control. This often explains the price difference between organic, grass-fed, hormones-free beef and processed beef or, for instance, brand-name sneakers and cheap sneakers that fall apart after a workout.

However, when it comes to pharmaceutical products, the situation is very different. Instead of asking ourselves why some medicines are so cheap in India we should rather ask: 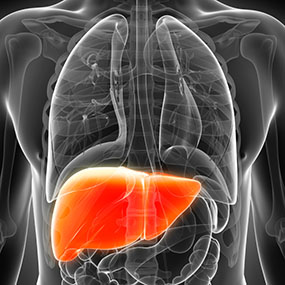 Why in the World the Drugs Are So Expensive in the United States?

Drug pricing policies in America are actually unique compared to the international healthcare scene. For instance, we are the only developed nation that allows healthcare companies to set prices for their own drugs, as they are set for many other goods. Free market is great, fair and self-regulating, however what works for beef, shoes, or novelty products simply does not work for medicine. The basis of market economy is that everyone pays what he or she can pay. If I can’t afford brand sneakers, I’ll have to go with some discount shoes. If organic steak costs too much, I’ll just stop by McDonalds. The difference with medicine, is that there are little to no alternatives: either I can afford the treatment, or I will remain ill and maybe even die. 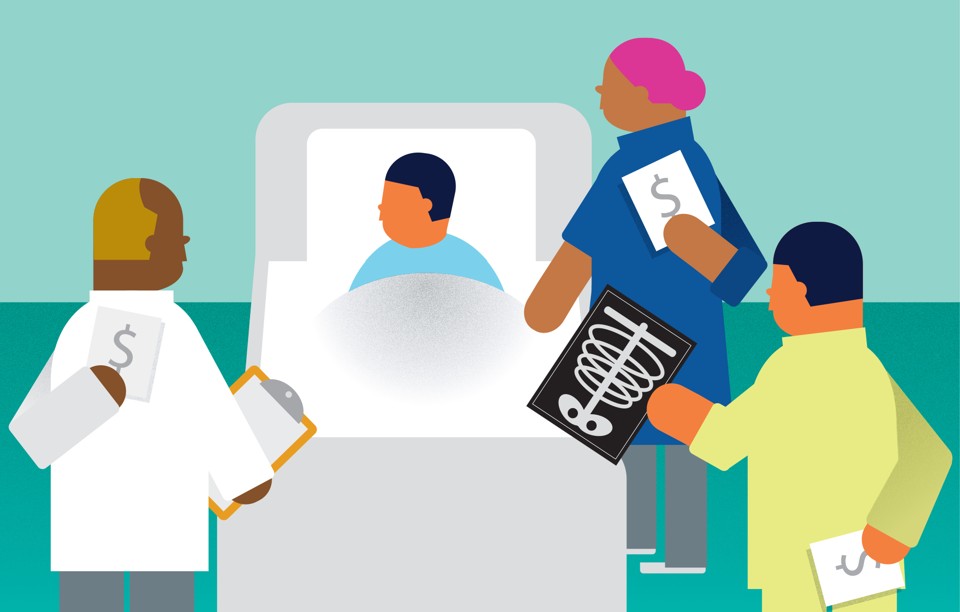 Drug companies often dictate the costs of their medications, and by proxy, the procedures involved with treating patients. With what seems like little advocacy for patients, it becomes normal to think high prices for healthcare are acceptable.

Now, obviously no government wants their citizens dying from lack of available drugs. That’s why in most developed countries, respective government representatives negotiate with pharmaceutical companies and define how much they can charge for one drug or another. The process differs from country to country, but historically the end result is often the same – companies are allowed to maximize their profit only within the limits where the useful treatments remain affordable.

However, in the United States, price negotiation for medicine doesn’t exist. Medicare is required to accept the price given by the pharmaceutical company. Federal law doesn’t even allow Medicare to bargain or negotiate bulk discounts. It is only logical that under these circumstances the prices skyrocket, and it becomes the norm to pay high prices for medication.

The Sky Is the Limit

Daraprim™ is a small, white tablet that looks like aspirin. Created in the 60s, even today Daraprim is still the main drug for the treatment of parasitic infection called toxoplasmosis, which is particularly dangerous for pregnant women and their unborn babies. In 2015, the producer of Daraprim™ suddenly decided to increase its price by stunning 5,500%. Large insurance companies were of course upset, and tried to look for alternative treatment options, but Medicare was obliged to pay $750 per tablet, which meant that average citizens were stuck paying the bill.

And $750 is not the limit either. Hepatitis C drug Sovaldi™ comes with a $1,000 bill per tablet. Cancer drug Mozobil™ – used for hematopoietic stem-cell transplantation in patients with lymphoma – costs over $5,000 per injection.

There are two reasons why this is happening. First, there’s no regulation to stop drugmakers from setting high prices. And the second, and most important reason, is that consumers simply don’t have a choice. When Sovaldi™ came out, it was the most efficient drug to cure hepatitis C, and its main component, sofosbuvir, still remains the basis for modern hepatitis C combination therapies. And pyrimethamine, the active ingredient of Daraprim™, is still the best toxoplasmosis treatment.

Not all the countries accept today’s patent situation as it is. Some argue that Gilead patent claims are abusing patent laws and let the company to essentially monopolize healthcare the market. Few challenges were filed against Gilead’s patent applications in Argentina, Brazil, China, Russia and Ukraine. They show that, despite its obvious medical benefits, sofosbuvir was developed using previously known compound, and is, therefore, not innovative enough.

In 2014, Egypt rejected the sofosbuvir patent for the same reason. In January 2015, the Indian Patent Office of New Delhi did the same thing, saying that the drug represented only minor changes to a previous formulation and thus lacked the patent requirements.

However, when large sums of money areinvolved, the companies don’t give up easily. After the rejection appeal in 2016, India was forced to reverse the course and grant the patent to Gilead.

Patent or no patent, it’s impossible to keep inflated drug prices in India. Even in the U.S. and Europe, a $1,000 per pill drug is out of reach for most of the patients. What about India, where the majority of the population has never heard of health insurance and where GDP per capita is under $2,000?

Are Patents Good for You?

Patents are supposed to be good for innovation, and are meant to protect inventors from unfair competition and help innovative companies get the return on their R&D investment. The companies then can use the profit to develop new products or, when it comes to drugs, new formulations. Unfortunately, without competition – and that’s the case with a patent for sofosbuvir – the pharmaceutical companies can set unprecedented prices.

In 2014, sofosbuvir patent owner Gilead earned $10.3 billion with sofosbuvir alone, and nearly $25 billion in total. In 2015, the company made $32.2 billion and 94% of it is coming from the sales of hepatitis C antivirals. The most shocking fact is that it wasn’t Gilead who invented this miraculously efficient hepatitis C treatment. Sofosbuvir was actually developed by a small company Pharmasset, acquired by Gilead for $11.2 billion in 2011. Therefore, all R&D investment was paid off years ago.

Some say that Gilead was trying to fight the black market and to secure at least some revenue from the third world. Others say that the pressure of media and HCV advocates played a role. Whether this strategic move was done for CSR or for economic reasons, Gilead ended up signing licensed agreements with thirteen Indian drug manufacturers that allow the production and distribution of new hepatitis C drugs in 101 developing countries. The goal of this voluntary licensing program and “partnership”, according to Gilead, is to enable access to antiviral treatment for hepatitis C for as many people as possible, as quickly as possible.

The major problem with license agreements are that distribution of hepatitis C drugs is only allowed to so-called “resource-challenged countries”, for which even the price tags of generics are way too high. The middle and high-income countries – where people could actually afford it – are excluded from the scope. This definition leaves approximately 50 million of people suffering from hepatitis C without access to this affordable generic treatment.

The patent for sofosbuvir granted to Gilead by India raised many concerns, mostly because it gives Gilead an unlimited control over their licensed manufacturers.

Sofosbuvir-based Indian generics (Ledifos™, MyHep™ and others) are already sold with hepatologist’s prescription only. Rising concerns suggest that access will be restricted further and that the drug will be reserved exclusively for Indian residents. Other measures such as barcode scanning and selling one drug bottle at a time might be put in place.

Currently, these are only rumors. Even if these measures are actually taken, the implementation will take time and in some rural areas of India can never be possible. How can one imagine the barcode scanning system in the places that don’t even have electricity?

For an average Indian citizen, the new hepatitis C treatment is already out of reach. If the restrictive measures are actually taken, it will add insult to injury, hitting Indian economy and cutting down medical tourism that is booming today more than ever.

Even amidst all of the speculation and uncertainty regarding the future of licensing medication, there presents a worthwhile opportunity for Western countries that are looking for the means of acquiring treatments at lower costs. Medical tourism offers a viable solution for anyone who is searching for name-brand hepatitis C medication they need, by means of providing reduced pricing on an international economic level.

The generic version is sold in India at about $14 per pill. The full treatment course costs around $1200.

According to the research carried on by the University of Liverpool, manufacturing costs of 12-week course of sofosbuvir is about $68–$136. Within next decades, large-scale manufacturing of direct-action antivirals could bring the price of full hepatitis C treatment down to $100-$250 range, the researchers claim. 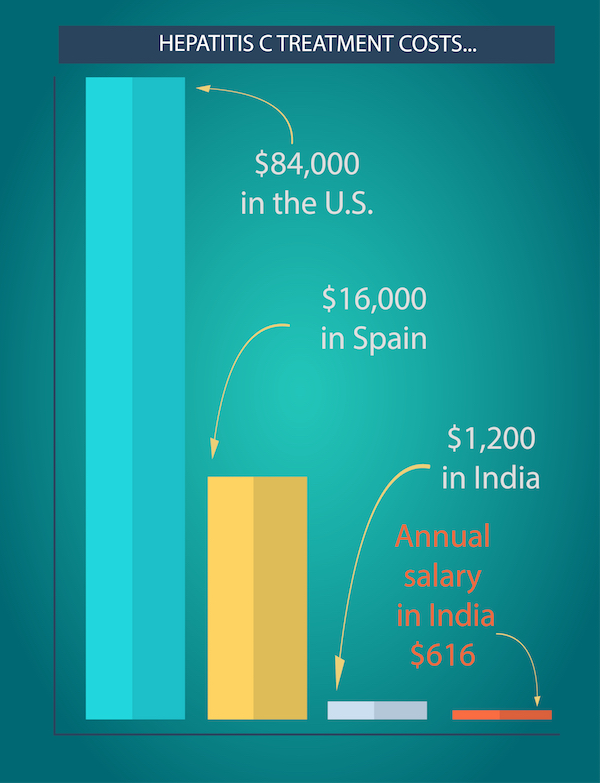